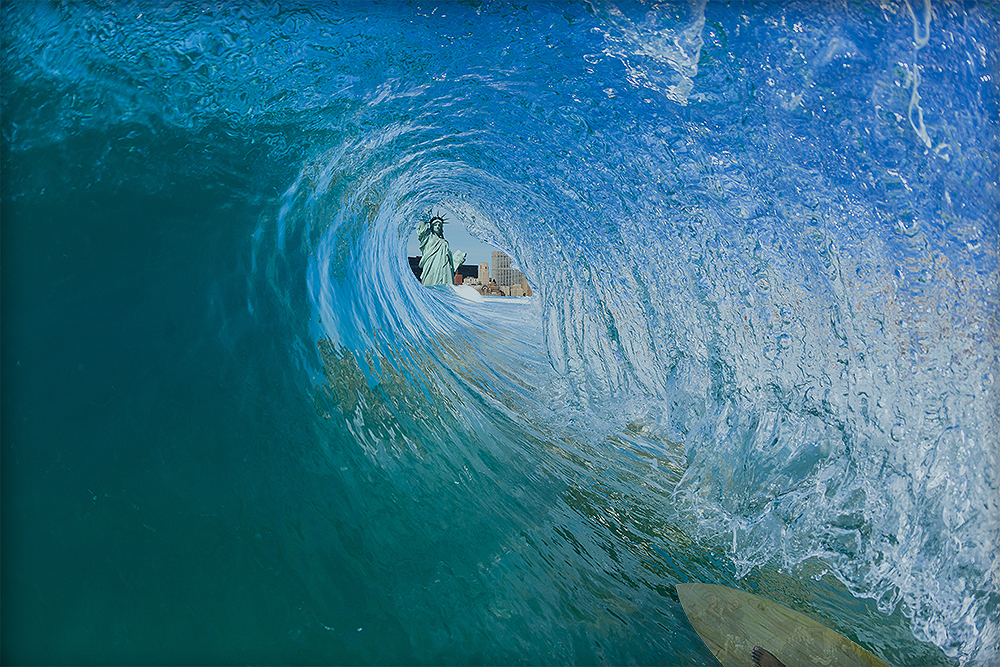 2021 began with a wave of material and dialogue on the importance of constructive civic learning and engagement to the future of our American democracy. The question is whether this wave will sweep across the country in the years to come, substantially strengthening our common purpose, or die far short of the reform shore.

The answer is most probably neither. This is the case because the wave is confronting decades of decline in civic education and citizen collaboration; an extremely polarized citizenry today; and systemic problems dating back through centuries to the founding of this nation. The conundrum created by these compounding conditions is highlighted below:

Those are just some of the boulders through which the civic learning and engagement wave must crash to get to shore and sweep across the land. They present bad news for those idealistic optimists looking for, or anticipating, a complete turnaround in America’s civic life. On the other hand, they represent good news for the pragmatic realists who understand that progress in these United States, no matter how difficult the impediments, can come through a solid plan combined with patience, pluck, and perseverance.

The better news, still relatively early in this new year, is that one of the worst ideas proposed for civic education for America in 2020 has been crushed and is no longer even a wavelet. That’s former President Trump’s call during his re-election campaign for a national program of “patriotic education.”

Trump first proposed this concept on Constitution Day, September 17, 2020, when he announced that he would be creating a 1776 commission to craft a pro-American curriculum to “restore patriotic education to our schools.” The patriotic education initiative appears to have been conceived primarily as a pushback against essays published as part the New York Times “1619 Project” series.

Those 1619 Project essays reframed history based upon a retelling of the slavery story and its role in the establishment and evolution of this country. There have been concerns raised about the accuracy of some of the 1619 Projects analyses. But there is agreement among most experts that there’s a need to ensure that our civic education in the future needs to be factual, inclusive and inquiry-based.

It would have been an indoctrination program of selective information. Programs of this type exist in authoritarian and totalitarian regimes around the world. They elevate conformity and blind allegiance, rather than independent thinking and civic values. Patriotic education would have moved this democracy backward rather than forward.

Three recent publications lay out processes and actions for moving our democracy forward:

These publications and numerous others, in conjunction with the unpatriotic behavior of those misguided and misinformed citizens who stormed the U.S. Capitol on January 6, have created a positive momentum and helped to advance the civic learning and engagement movement in 2021.

Much is being done to build on the platforms provided by the Our Common Purpose, Roadmap, and Federal Policy Agenda reports.

The series is being hosted by Danielle Allen, Director of Harvard University’s Edmond J. Safra Center for Ethics, and a co-editor of the Our Common Purpose report.

Each event is preceded by a workshop for K-12 educators and public librarians. Later in the year, the Library will reach out to public librarians with follow-up activities directed at helping them assist citizens of all ages.

These new guidelines try to thread the needle. As Stephen Sawchuk reports in his article for Education Week:

The new guidelines, developed by a national panel of dozens of academics, educators, and civic nonprofit leaders, center on the idea of “reflective patriotism”: that students should learn to feel committed to this country and the ideals it purports to represent, while also questioning, critiquing, and holding the powerful to account when it fails to live up to those ideals.

They state that students should learn about the importance of civic participation, the founding of American democracy, and the notion that civil disagreement is baked into the U.S. Constitution and is part of the American experiment.

They are guidelines and not standards. Time will tell the degree to which they will be accepted and/or implemented.

Civics Secures is definitely a middle of the road piece of legislation crafted to maximize bipartisan support and its potential of being passed and becoming a law. Notably, the Act prohibits using funds for the development of any national curriculum in American history or civic education.

Other key elements of the Act include:

Civics Secures is a comprehensive and moderate piece of educational legislation not requiring or mandating any state, local, or educational institution to introduce any radical or far-left concepts. Nonetheless, it has already generated opposition from the conservative side of the street.

Writing for the conservative National Review, Stanley Kurtz opens his article, titled “The Greatest Educational Battle of Our Lifetimes,” as follows: “With last week’s introduction in Congress of the misleadingly named Civics Secures Democracy Act, we are headed toward an epic clash over the spread of uber-controversial pedagogies — Critical Race Theory and Action Civics — to America’s classrooms.” Later on, Kurtz opines, “Because this new legislation is a backdoor effort to impose a national curriculum in the politically charged subject areas of history and civics, the battle will rage in the states, at the federal level, and between the states and the federal government as well.”

Kurtz reads into the legislation nothing that is actually there and uses his own filter to interpret its intent and utilization. Unfortunately, he is probably not alone in his perspective and there will no doubt be opposition to the passage of this bipartisan and benign piece of legislation. That’s why it will take some time and possibly this entire year to work its way through Congress, if it manages to do so.

Time to Catch the Wave

In conclusion, attention has been called to the need to address this civic alienation and political divides throughout this century. For example, the need to enhance and make our civic education more effective has been on the nation’s radar screen since 2003, when the Carnegie Corporation of New York and the Center for Research on Civic Learning and Engagement at Tufts University released a seminal report, The Civic Mission of Schools, identifying this as an critical issue.

In 2011, Guardian of Democracy was released as a successor to that Report.

In 2012, the Department of Education, under the Obama administration, released a Road Map and a Call to Action for Advancing Civic Learning and Engagement in Democracy. In 2013, the American Academy’s Commission on Humanities and Social Studies issued a report stressing the need to expand the educational envelope beyond STEM to include civic education.

In 2017 the Carnegie Corporation of New York and the William and Flora Hewlett Foundation convened a national summit, Democracy at A Crossroad: Our Nation Needs Innovative Civic Learning Now. In 2018, the Brown Center for Education at the Brookings Institution released its 2018 Report on American Education, which in its second chapter indicated there was considerable room for improvement in states’ civic education requirements.

In 2020 and 2021, there are more reports and there is a growing civics wave in this country, building upon but different than the waves of the past two decades.

It is a wave that has been constructed by folks from across the political spectrum to address an intensifying civic illness that has grown more apparent and devastating for this country in this 21st century. It is a wave we all should be able to ride together to inoculate ourselves against that which separates us and to unite us in pursuit of the common good.

Unfortunately, the COVID-19 pandemic has shown there are many of our fellow citizens who will not grasp the serious and authenticity of very real problems and refuse to become part of the solution by getting vaccines and following guidelines that prevent an illness from getting worse.

It must be expected that there are citizens who will do the same with regard to the need to improve civic learning and engagement for the future of this country. They will deny and do nothing — or, even worse, do things such as suppressing voting rights to make our civic life more unfair. There will be others — “reflective patriots” — who will come onto the playing field to make a positive difference.

We believe those reflective patriots will prevail. We share Alexandra Hudson’s view, who comments:

American civic life — as measured by a variety of metrics at earlier points in American history, at the time of Putnam’s writing, and today — has endured ebbs and flows, dissipation and re-invention, offering reason to have faith in the resilience of America’s civic tradition. In short, we have always been, and in our own way still are, the “nation of joiners” that historian Arthur Schlesinger, Sr., and Alexis de Tocqueville before him, praised. For all its troubles, our civic life is still full of the potential for renewal.

We believe that there will be more of us who will surf that purple wave than will not. If they do not, we can wave goodbye to our American democracy.