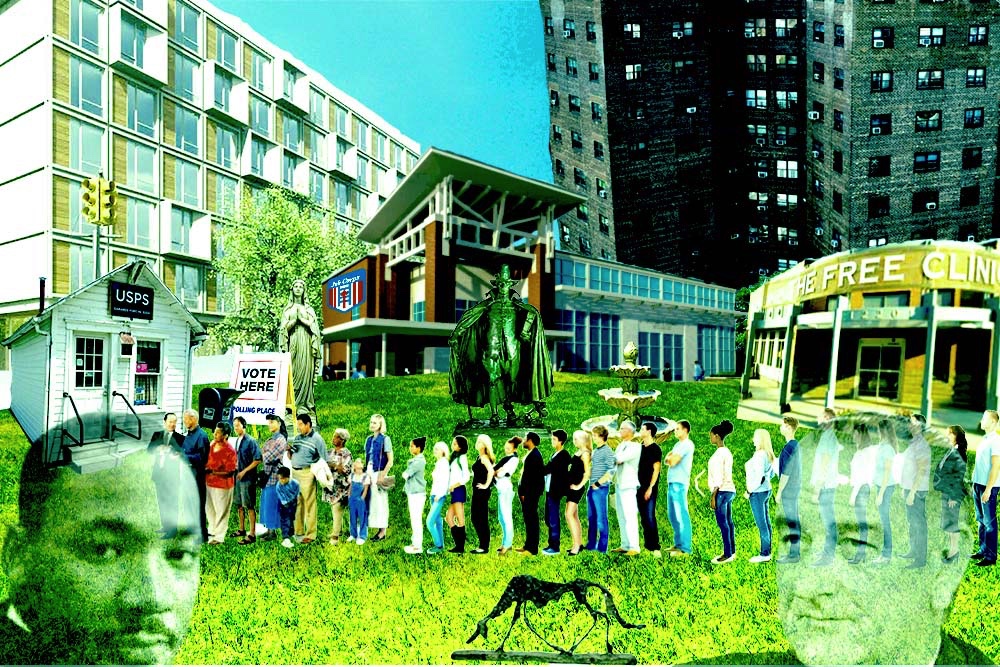 “Would you tell me, please which way I ought to go from here?”

“That depends a good deal on where you want to get to,” said the Cat

“I don’t much care where,” said Alice

“Then, it doesn’t matter which way you go,” said the Cat.”

Unlike Alice in Wonderland, many Americans, know where they want to go. They want to make America great.

The problem is that what constitutes greatness and the way to get there differs substantially depending on whether you are a member of the Trump Party (once known as the Republican Party) or the Democratic Party.

The irony is that much of that forward-looking vision was first advanced over one-half century ago when President Lyndon Baines Johnson called for a Great Society. In a commencement speech at the University of Michigan on May 22, 1964, LBJ advised the graduates,

Your imagination, your initiative, and your indignation will determine whether we build a society where progress is the servant of our needs, or a society where old values and new visions are buried under unbridled growth. For in your time we have the opportunity to move not only toward the rich society and the powerful society, but upward to the Great Society.

The Great Society rests on abundance and liberty for all. It demands an end to poverty and racial injustice, to which we are totally committed in our time. But that is just the beginning.

Johnson was right. His speech was “Just the beginning.”

Action followed those words. In the mid-60’s, an ambitious legislative agenda was passed and numerous programs were implemented. The cornerstone was the War on Poverty, implemented through the Economic Opportunity Act and the Office of Economic Opportunity, which gave birth to the Job Corps and Community Action Agencies. Other Great Society initiatives included: Medicare and Medicaid; Head Start; Urban Renewal; the Water Quality and Motor Vehicle Pollution Control Acts; the Immigration and Naturalization Act; creation of the Consumer Products Safety Commission; and establishment of the National Endowment for the Arts and the National Endowment for the Humanities. In addition, the Civil Rights Act of 1964 and the Voting Rights Act of 1965 were passed in this same short time period.

The breadth, depth, and lasting impact of those initiatives is incontrovertible. That’s not to say that America became the egalitarian Great Society that LBJ described.

Far from it. Progress was and has been made, however, on a number of fronts moving America in the direction of becoming a better and fairer society.

The outcomes in the poverty arena were reviewed in detail in 2014, the fiftieth anniversary year of the initiation of the War on Poverty. In January of that year, the Obama White House issued a Progress Report citing accomplishments attributable to the war and identifying key areas where work still needs to be done. The Report highlighted the fact that “poverty has declined by more than one-third since 1967.”

In a new study released in August of this year, Nathaniel Hendren, an economics professor, and Ben Sprung-Keyser, a graduate student at Harvard University, examined 101 government programs implemented since the 1960’s. According to Seema Jayachandran of the New York Times, they concluded that 16 of those programs — including Head Start and Medicaid — from a financial standpoint “broke even or did even better” based upon their cost-benefit analysis.

In sum, using objective data and a variety of sources, it appears that American society was made greater because of the impetus provided by The Great Society. If a letter grade were to be given on the results, it would be a solid “B”.

That’s not the grade Amity Shlaes, author of the book, Great Society: A New History released in November 2019 would assign. She would undoubtedly award an “F”.

Shlaes comes at her assessment from the conservative side of the street. She basically sees the Great Society as a flawed experiment and an attempt to socialize the United States through governmental intervention. Her argument is that what is needed to make America greater is more changes driven through capitalism or the private sector.

Shlaes “New History” might more appropriately be labeled a “Selective, Simplistic and Revisionist History.” Her history focuses primarily on illustrative story-telling narratives and vignettes rather than rigorous analysis.

In his review of the book, Binyamin Applebaum notes,

Shlaes Great Society tome rivals her earlier work The Forgotten Man: A New History of the Great Depression in providing a highly critical and restricted viewpoint on the contribution that government programs have made to sustaining and building American society. Because of this judgment, it has been promoted in ads regularly this year, with endorsements from conservatives such as Michael Barone of the Wall Street Journal, Fred Seigel of the National Review, and Alan Greenspan, former chairman of the Federal Reserve.

Shlaes’ contrarian Great Society perspective coming out in this presidential election year — whether intentional or not — provides some support for Trump’s version of the Great Society at a time when most of the books published over the past two years have been highly critical of all aspects of Trump’s regime, administration, and its effect on American democracy and society. That said, what is Trump’s Great Society?

That was because Trump is the platform. The Great Society is whatever he says it is.

Trump spelled out some of the elements of his “Great Society” in his speech from the White House lawn before 1,500 devotees on the final day of the Convention when he said.

And this election will decide whether we will defend the American way of life or allow a radical movement to completely dismantle and destroy it.

Trump’s most telling comment came when he clarified who the Great Society belongs to by saying:

The fact is, I am here. What is the name of that building? But I’ll say it differently, the fact is, we are here and they are not. To me, one of the most beautiful buildings anywhere in the world is not a building, it is a home, as far as I am concerned. It’s not even a house, it is a home. Wonderful place with an incredible history. But it is all because of you. Together, we will write the next chapter of the great American story.

Trump’s Great Society is exclusionary, divisive and dedicated to maintaining the status quo. It is a White House which is primarily a home for White people and those who want to wallow in the remembrances of America’s past.

Trump provided an important insight in his speech when he stated, “At no time before have voters faced a clearer choice between two parties, two visions, two philosophies or two agendas.”

We are not certain if that assessment regarding the unique nature of this year’s presidential contest is accurate. Every now and then Trump tends to exaggerate just a little bit. We are certain that the visions and agendas of the two candidates for president are decades and possibly centuries apart in terms of the America they see and would serve.

As explicated in his acceptance speech at the Democratic National Convention, Joe Biden’s Great Society sounds quite different than Trump’s. It is different in both tone and its encompassing focus:

It is different in its emphasis on creating the future rather than living in the past:

As God’s children each of us have a purpose in our lives. And we have a great purpose as a nation: to open the doors of opportunity to all Americans. To save our democracy. To be a light to the world once again. To finally live up to and make real the words written in the sacred documents that founded this nation that all men and women are created equal. Endowed by their Creator with certain unalienable rights. Among them life, liberty and the pursuit of happiness.

Joe Biden’s Great Society is inclusionary, unifying, and aspirational. It is an America in which the White House is a house which belongs to all the people and is a home in which they can grow and fulfill their dreams.

In 1964, Lyndon Baines Johnson’s Great Society was a great notion. In 2020, voters will decide whether that notion or something like it is worth reaffirming or it is time to retrench and retreat.

This decision will determine whether the United States of America will continue its slow and not always steady progress along the path to someday becoming a truly great nation.

The future of the Great Society is in the hands of the citizenry. That is where it belongs and we are confident that it is in good hands.

Two roads diverged in a wood, and I –

I took the one less traveled by

And that has made all the difference.