If those responsible (for the January 6 insurrectionist storming of the Capitol) are not held accountable, and if Congress does not act responsibly, this will remain a cancer on our constitutional Republic, undermining the peaceful transfer of power at the heart of our democratic system.”

Liz Cheney and Adam Kinzinger are being lauded as courageous heroes, and while I agree with that notion, why? Because they told the truth? Why is telling the truth hard? I guess in this America, it is.”

The first day of the January 6 Select Committee hearings convened on July 27 was riveting and rattling.

U.S. Capitol Police Officer Dunn was right in his testimony to the Committee. Telling the truth in this America is hard. The truth must be told, nevertheless. Here it is.

Representative Cheney was right in her opening comments. There is a cancer on “our constitutional democracy”. Sadly, that cancer is not in its early stages and limited only to the “peaceful transfer of power” and to a singular event in Washington, DC.

The cancer has metastasized and is being spread by a cult into communities across this country. It has and is affecting almost all aspects of our society and this great nation — most notably, our physical health, the health of our democracy, and our mental health.

That might seem like an overstatement or an exaggeration of the facts. Unfortunately, it is not. The evidence that supports this assessment is unequivocal and incontrovertible.

Since the COVID-19 pandemic shut down the United States of America in March 2020, there have been more than 36 million cases and 615,000 deaths.

By early July of this year, it appeared that we may have been turning the corner on COVID. We were.

When we turned that corner, however, we ran into the unvaccinated, who constituted more than 30 percent of the U.S. population. This led to what could be labeled the “unvaccinated surge” of COVID-19.

Some would attribute the surge to the Delta variant, which is about 55 percent more transmissible than the Alpha variant of COVID-19. Truth be told, though, if all Americans had been vaccinated, or had we reached herd immunity with 70 to 80 percent of the population vaccinated, there would have been no surge nationally and the Delta variant would have spoken primarily to itself.

Instead, there has been a surge. As the Kaiser Family Foundation noted in a report issued on July 30, “Almost all (more than 9 in 10) Covid-19 cases, hospitalizations, and deaths have occurred among people who are unvaccinated or not yet fully vaccinated, in those states reporting breakthrough data.”

There are some breakthrough cases that have been documented among those who have been vaccinated. They comprise a very small percent of cases and, in the main, cause no symptoms or mild cases. Hospitalizations for the vaccinated to date have been few and far between and deaths virtually non-existent.

Given these statistics, who would put their own physical health and the health of others including their families and friends at risk by going unvaccinated? We would classify them into five major categories:

No definitive study has been done to determine the size of these categories. But, regular polling by the Kaiser Family Foundation has shown that around 25 percent of Republicans have said they would either definitely not get vaccinated or would do so only if required to. A Washington Post-ABC poll released in early July found that only 49 percent of Republicans had been vaccinated or said they intended to compared to 93% of Democrats.

There would be some of each category of the unvaccinated within the Republicans polled. It can reasonably be assumed, based upon various sources, that there are a number of those who were, and are, still refusing to vaccinate who are doing so primarily or purely as an act of political resistance.

The Sunday New York Times of August 1 reported that “Republican affiliation” and “People who say they will never get a COVID-19 vaccine are disproportionately likely to be white and live in rural areas. They are overrepresented in the South and the Midwest.”

David Frum, senior editor for The Atlantic and former speech writer for George W. Bush, takes the analysis one step further, observing that “Experts list many reasons for the vaccine slump, but one big reason stands out: vaccine resistance among conservative, evangelical, and rural Americans. Pro-Trump America has decided that vaccine refusal is a statement of identity and a test of loyalty.”

The Cancer Cult: An Introduction

Within that group of vaccine resisters are the members of the Cancer Cult. The leader of that cult is Donald Trump.

The term cult is usually applied to a religious movement. While there may be a religious aspect to the devotion to Trump, the operational definition which fits best is the following adapted from yourdictionary.com:

Some of those beliefs are the beliefs of the members. The others are those of Trump himself. There is a reciprocity in this relationship that is mutually beneficial to the cult specifically, and harmful to society in general. In a phrase, this is a cult of a personality and aligned personalities.

There has been no official calculation or estimation of the size of the cult. There are indicators that suggest it is substantial. Consider the following:

Not all of those who attend Trump rallies, believe the Big Lie, support Trump more than the Republican Party, and provide small donations are members of the Cancer Cult. But it is reasonable to assume, given the foregoing, that the Cult membership could be in the millions — and possibly tens of millions.

We will go into detail analyzing the nature of the cult and the primary beliefs of its members in the last blog of this series. In this blog, suffice it to say that the Cancer Cult is a major contributor to the current and accelerating surge of COVID-19.

By early August, the US was averaging 100,000 cases a day, compared to about 11,000 a day in June. This caused President Joe Biden, on August 6, to observe, “Today about 400 people will die because of the Delta variant in this country. A tragedy, because virtually all these deaths were preventable if people had gotten vaccinated.”

It is indeed a tragedy. A greater tragedy is that the former President has not spoken out to try to rally his cult members to join the vaccine brigade and to become team players in combatting COVID.

Instead on July 18, the former President issued a statement through his Save America PAC, proclaiming:

Truth be told — and as we said at the outset of this piece, it must. The so-called Fake News is telling the truth.

So, too is Trump, in his own way. His message is targeted to the cult members. It accurately describes why they are resisting vaccination and — reading between the lines — encourages them to continue to do so because of their beliefs.

Some columnists have recommended not criticizing the Trump supporters who have not been vaccinated. Gary Abernathy, a former Trump supporter turned off by “his (Trump’s) actions after the 2020 election,” closes his column observing;

Trump supporters aren’t going away, and those who continue to paint them as the lowest form of life reveal themselves to be more interested in perpetrating stereotypes and nurturing divisions than in achieving what’s needed to survive — reaching across our political chasm, respecting our differences and finding common ground where we can.

Conservative author Marc Thiessen closes his column asserting, “Free people are free to be wrong. The rest are persuadable. The way to do so is not with mandates or insults. Approve the vaccines and let them decide.”

We agree with both Abernathy and Thiessen. We need to search for common ground and to let free people decide. That will enable the many Trump voters/supporters who have valid concerns and a willingness to compromise to collaborate with those who are not Trump supporters.

On the other hand, there is no need to be delusional or to assume that the members of the Cancer Cult have any desire or interest in discovering any common ground. They have staked out their territory and it belongs only to those who will swear total loyalty or fealty to the cult’s leader and its beliefs.

Pulitzer Prize winner for commentary Kathleen Parker opened a recent column on the impact of the Delta variant on the relationship between Americans from different camps as follows:

We are, it seems, on the verge of war. A germ war to be precise that pits the vaccinated against the unvaccinated and is forcing government officials, universities and corporations to pick sides. A time for choosing awaits us all.

We’re about to enter a strange era not seen since 1905, when the Supreme Court ruled (7 to 2) in favor of state police powers to require vaccines, in that case smallpox, for the benefit of a larger community. Today, such a scenario seems better suited to science fiction. But this is our world now, and we’ve all been inducted to serve.

Yes, we have all been inducted to serve and must become activists in a war not between Republicans and Democrats, but in a battle against the Cancer Cult.

This is a battle for the head, the heart, and the soul of America. If the Cult has its way and the cancer wins, our nation’s physical and mental health and our democracy itself will be decimated.

Telling the truth in this America is hard. The truth must be told, nevertheless.

Stay tuned. There is more to come in the next two blogs. 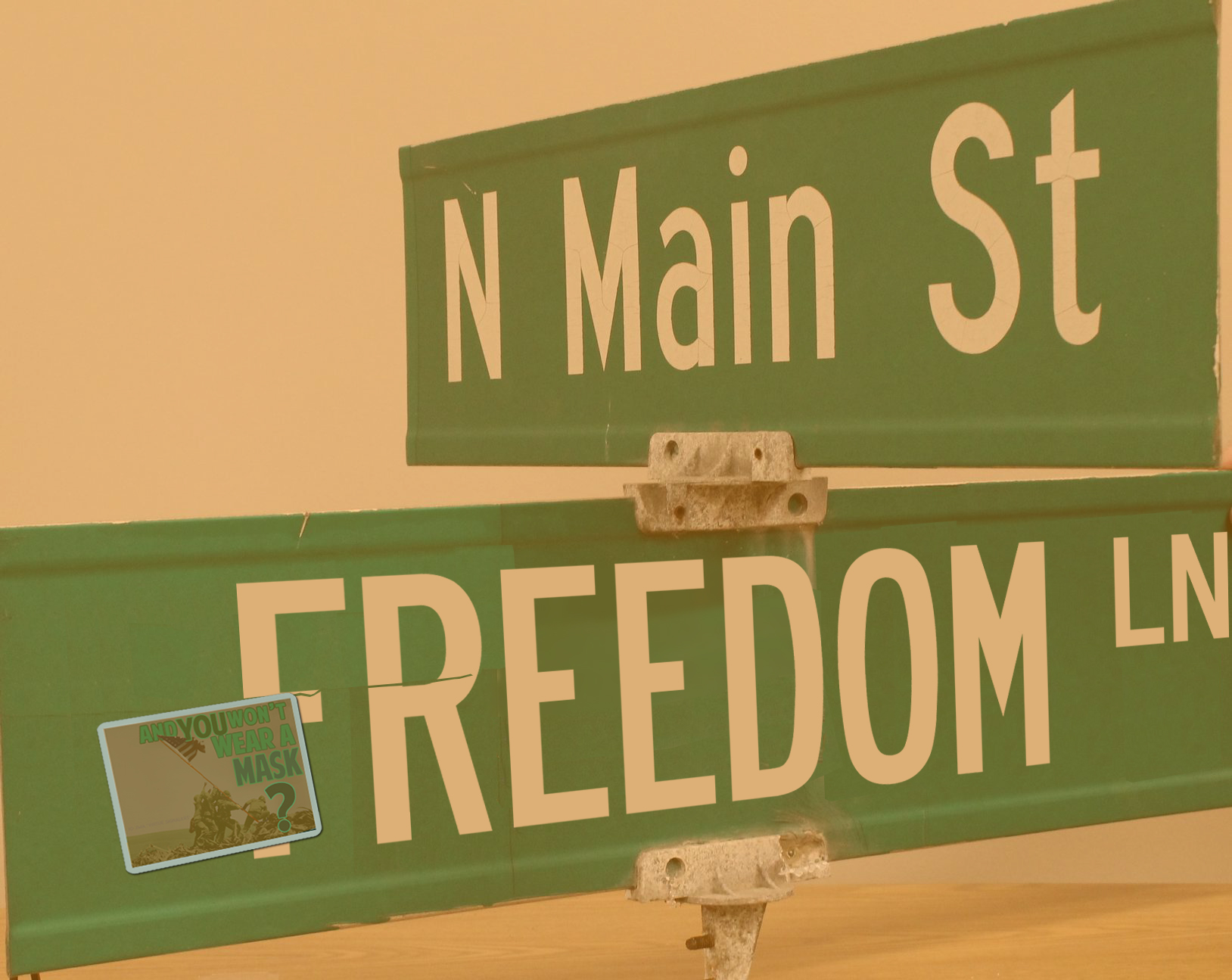