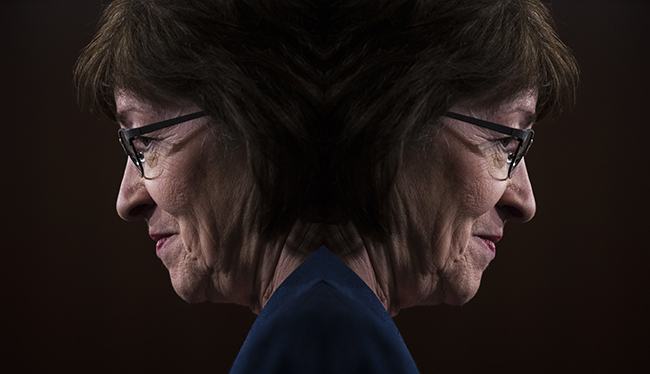 Stand By Your Man

On Friday, October 5, the day before she voted to confirm Brett Kavanaugh as a justice to the Supreme Court, Senator Susan Collins (R-ME) delivered a speech of over 40 minutes before the Senate.

In her remarks, Collins tried to explain and defend her decision. Her argument was well-structured, logical and presented in a passionless and objective manner. There was only one problem. It was impossible to defend the indefensible.

The evidence against it was far more compelling. That was Brett Kavanaugh himself.

His decisions on the bench; history as a political operative before becoming a judge; avoidance of direct answers and twisting of the facts during his initial hearings; extensive involvement with the White House in hearing preparation and follow-up activities; and contemptuous and belligerent behavior during the sexual assault hearing discredited Collin’s case and made it unpersuasive.

Kavanaugh’s performance during the second hearing caused non-partisan observers, such as former Supreme Court Justice John Paul Stevens and more than 2,400 law school professors, to come forward and say that he did not have the judicial restraint to sit on the Supreme Court bench. It had little to no impact on Collins.

Senator Collins had a choice to make in this instance that is framed by two country songs — Kenny Rogers’ The Gambler and Tammy Wynette’s Stand by Your Man.

The Senator could have shown her independence and non-partisanship. She could have done this by not supporting Kavanaugh and standing up and walking away. Instead, she toed the party line and stood by her man.

During her speech, Collins indicated that she was confident that her man would stand by her. She believes that he will take judicial precedent into account in his rulings in cases like Roe v. Wade.

History will be the judge of the veracity of that belief. Unfortunately, we believe it will prove Senator Collins’ trust in now Supreme Court Justice Kavanaugh was misplaced.

If we are correct, she and the rest of America will have to live with the consequences, and recognize that Standing by Your Man is not always the right thing to do.