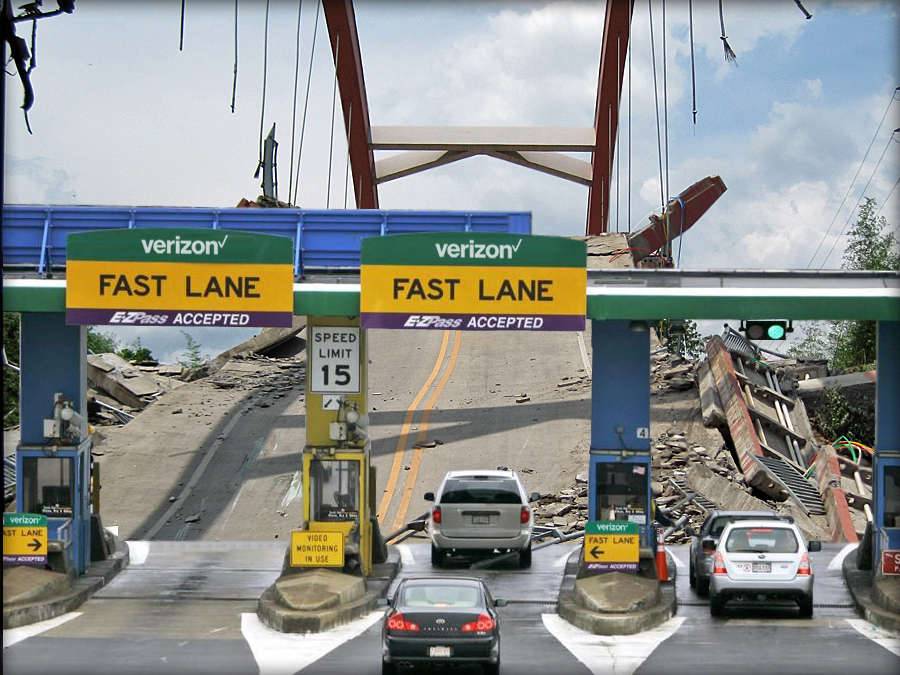 Smoke On The Water

It was less than one month ago on February 12, that President Trump introduced his American Infrastructure Initiative. Since then, the President has had very little to say about infrastructure as his attention has turned to other matters such as gun control, tariffs, and immigration.

Congress has not paid much attention to Trump’s infrastructure recommendations either as it has been consumed by a myriad of other issues. Indeed, in late February when Senator John Cornyn of Texas (R) was asked if Congress would get an infrastructure bill passed before the November election, he responded:

“It will be challenging. I certainly would be happy if we could, but we’ve got a lot of things to do, that being one of them, and I don’t know if we will have time to get to that.”

So, Trump’s infrastructure plan appears to be vanishing in thin air. Maybe the reason for this is that Trump’s plan was never a real plan at all.

The truth is that the “framework for rebuilding infrastructure” put forward by the President was more smoke and mirrors than it was concrete and pilings. There are many reasons for this assessment.

The primary ones include:

The Trump administration believes that its infrastructure plan “will spur at least $1.5 trillion in infrastructure investments.” That might seem like a lot of money until one considers the state of America’s infrastructure and the span of time over which this money will be spent.

The American Society of Civil Engineers (ACSE) has issued an Infrastructure Report Card every 4 years since 1998. The report card assigns grades in sixteen categories. America’s grade point average in 2017 was D+.

ACSE estimates that the cost to improve the infrastructure in the ten year period from 2016–2025 would be almost $4.6 trillion. Based upon current funding and projections, it estimates that there will be a $2.06+ trillion gap in funding over this time frame.

It might appear that a plan for $1.5 trillion would begin to fill that gap. But, the fact is that the Trump plan only brings $200 billion in federal dollars to the table. The rest would have to be raised.

The federal commitment amounts to only $20 billion dollars a year as compared to a need, based on ACSE’s numbers, of $206 billion — or 1/10th of what is required. This is a woefully insufficient commitment from the federal level.

It is not realistic to expect the federal level to pony up all the funds to address the nation’s infrastructure requirements. But it is completely unrealistic to think that the administration’s proposed approach of using $100 billion of the money that it brings to the table to “create an Incentives Programs to spur additional dedicated funds from states, localities and the private sector” will bring $1.3 trillion more to the table from those entities. Here’s why.

First and foremost is the financial condition of many states and localities. As we pointed out in a blog posted before the Trump plan was officially announced, “Many of those entities are resource and cash-strapped. They not only don’t have matching funds. They don’t have a match to light the infrastructure candle.’

Second, and close in importance, there is a question of whether the returns on many of the infrastructure projects will be large enough to stimulate private sector investments. The problem is that many of the projects with the greatest needs are in the inner cities of metropolitan areas and mid-size cities that are struggling financially.

These locales have extensive maintenance, repair and/or reconstruction requirements for items such as crumbling bridges, roads, transit systems, and water and sewage systems. None of these projects are high profit items and thus will not be attractive to private investors.

This deficiency is compounded by the allocation of the funds in the Trump infrastructure plan. $50 billion, or 25% of the total $200 billion will “be devoted to a new Rural Infrastructure Program to rebuild and modernize infrastructure in rural America.”

Another $20 billion will be dedicated to a Transformative Projects Program to fund “bold and innovative projects” that might not “attract private sector investment because of the project’s unique characteristics.” This means that a full $70 billion, or more than one-third of the proposed federal funds, will be taken off of the table for what might be labeled the routine or normal infrastructure improvement needs in larger and mid-sized metropolitan cities.

What could be put on the table, though, is the opportunity for the private sector to purchase and take over the management and operation of federal public assets. Assets that the plan proposes considering selling off include: Ronald Reagan Washington National Airport, Washington Dulles International Airport, the George Washington and Baltimore Washington Parkways, and the transmission assets of the Tennessee Valley Authority.

The plan does not cite any studies on what the financial gains from the sale of any of these assets could be. It simply states that the federal agencies should be allowed to divest themselves of assets if they “can demonstrate an increase in value from the sale would optimize the taxpayer value for federal assets.”

The list of what is wrong with the administration’s infrastructure plan could go on and on and on. In summary, however, the overriding problem with this “plan” is not what is there but what is not there.

There has been significant substantive work done on a national infrastructure initiative over the past decade. As noted in our earlier blog on this topic in January of this year, much of it has revolved around proposals on Capitol Hill to develop a national infrastructure bank. We presented some of our own recommendations for the establishment of a National Industry, Innovation and Infrastructure Bank in a 2011 blog.

More recently, in its April 10, 2017 issue, Time presented a special report on Rebuilding America that outlined “25 smart ways to fix our infrastructure”. And Washington Monthly, in its 2017 issue for March/April, featured an article titled “the thinking person’s guide to infrastructure” which sets out three basic principles for any new legislation.

It’s not that there has been a shortage of ideas about what to do to address and solve America’s infrastructure problems. There are even a few good ideas in the Trump infrastructure plan.

Some of these include, as William Galston comments in a blog for the Brookings Institution, “…expanding existing subsidy programs that have proved effective in expanding transportation and water infrastructure.” Galston goes on to point out, however, “But there is a void at the core of the administration’s plan: funding.”

Don’t take his word for it. Take Donald Trump’s. According to PolitiFact, during the campaign, Trump promised to “invest $550 billion in infrastructure.” $200 billion doesn’t sound like $550 billion to us.

This sounds and looks like smoke and mirrors to us. This plan is a non-starter. That’s the bad news.

The good news is that the hollowness of the plan and the rhetoric surrounding it should serve as a wake-up call. The better news is that there are plenty of serious proposals out there that can be drawn upon to create an authentic “fair and balanced’ infrastructure plan.

When will such a plan be developed and a bill be passed to put it in place? That’s hard to tell. It seems unlikely that will occur before the November elections, and even less likely that it will occur in the lame duck session. That takes us to the January of 2019 and the 116th United States Congress. Perhaps they will understand that time is of the essence.

As the ASCE noted in its 2017 Infrastructure Report Card, “The most recent analysis reveals that the U.S. has only been paying half of it infrastructure bill for some time and failing to close that gap risks rising cost, falling business productivity, plummeting GDP, lost jobs, and ultimately, reduced disposable income for every American family.”

They wrote this before Trump’s tariffs on aluminum and steel which will increase the costs of infrastructure repair and which almost every knowledgeable observer agrees will harm rather than help the economyoverall.

We will not be able to whisk this fact away with smoke and mirrors. What we need is for Congress to stand and deliver before this country has nothing left standing.