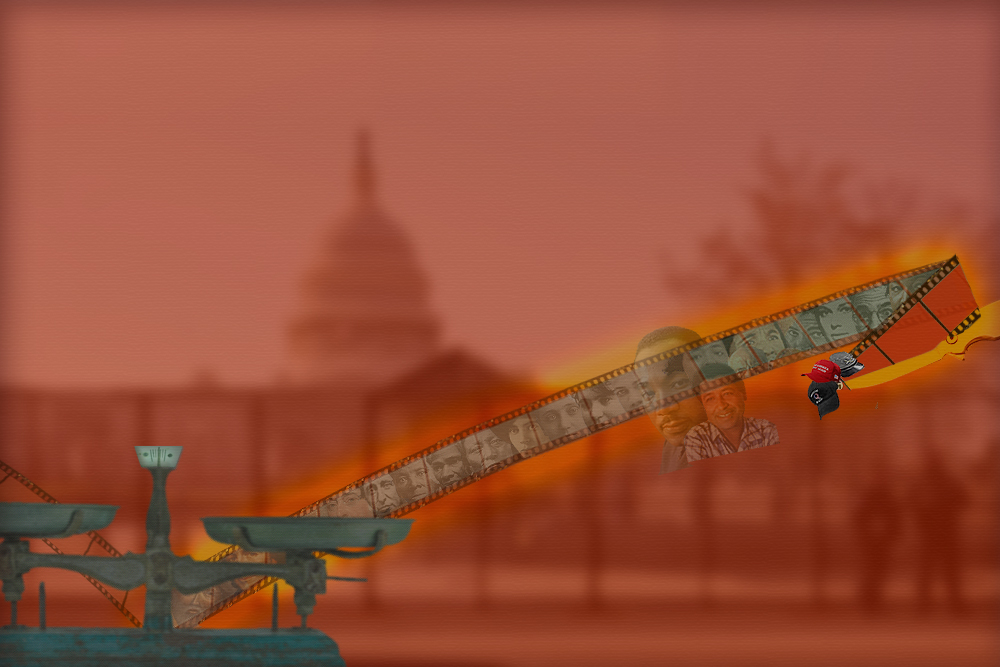 The Senate impeachment trial is over. As expected, former President Donald Trump was not found guilty.

Now, the real trial begins. That is the trial for the United States of America and this democratic republic.

Our American democracy is at a crossroads. The path we choose to follow will determine the future of that democracy and whether it has one.

In speaking out for human and civil rights more than one-half a century ago, Martin Luther King, Jr. (MLK) said:

This will be the day when we shall bring into full realization the dream of American democracy — a dream yet unfulfilled. A dream of equality of opportunity, of privilege and property widely distributed; a dream of a land where men will not take necessities from the many to give luxuries to the few.

MLK charted a course to move this democracy forward.

In speaking out for gun rights and conspiracy theories over the past few years, Marjorie Taylor Greene (MTG) (R-Ga) has said numerous things. MTG:

MTG is charting a course to move this democracy backward.

MTG has been called out by some in the leadership of the Republican Party for her harmful rhetoric which has included vilifying Blacks, Muslims and Jews:

In spite of McCarthy’s statement, the House Republican conference did nothing formally to reprimand MTG for her unseemly behavior. As a result, on February 4, the full House voted 230 to 199, with 11 Republicans joining 219 Democrats, to take Greene off the Committees to which she had been assigned.

During the House hearing, MTG recanted some of her more outrageous QAnon-related statements, issued a semi-apology, and stated “I was allowed to believe things that weren’t true.” Many of the Republicans in the House gave her a standing ovation at the conclusion of her “courageous confession” in which she assumed no personal responsibility for her actions.

After her command performance in the House chambers, MTG went off script, spoke for herself, and told the truth. She tweeted out on February 5, “I woke up early this morning literally laughing thinking about what a bunch of morons the Democrats (+11) are for giving someone like me free time.” In a press conference on that same day, MTG proclaimed, of Donald Trump, “The party is his. It doesn’t belong to anyone else.”

MTG might say the Republican Party belongs to Trump but it does not belong to him alone. It also belongs to mirror images of Trump like MTG.

That is the point that Michelle Goldberg makes in an article published in the New York Times titled “It’s Marjorie Taylor Greene’s Party Now,” and Molly Jong-Fast makes, in her Vogue article titled “Marjorie Taylor Greene Is No Outlier. She Is Now the Face of the Republican Party.”

There is one other significant difference in the paths espoused by MLK and MTG. One path embraces and advocates nonviolence. The other supports and endorses violence.

The MTG path is a dark and dangerous one. The fuel for traveling that path is hate speech and dis- and misinformation.

Put it all together, however, and in this bewildering 21st year of this twenty-first century, it appears that MTG’s path could prevail. Contemplate: The more than 74 million citizens nationwide who voted for Donald Trump to return to the presidency. The tens of million of Americans who believe — or at least accept — the Big Lie that the presidential election was stolen. The insurrectionist mob rioting and storming the U.S. Capitol. The 147 Republican Party members who did not vote to certify the Electoral College presidential results. The Republican Party moving from the party of conservative principles to the party of populist passions. The list could go on and on.

On the other hand, there are reasons to still believe that the MLK path will prevail. Contemplate: The more than 81 million citizens nationwide who voted for Joe Biden and to “fire” Donald Trump. The diverse nature of the new administration and its commitment to the nation’s institutions, social and equal justice, the country’s democratic values, and promoting unity. The 145 Republicans in the House who, when allowed a secret ballot, voted by an overwhelmingly margin to retain Liz Cheney, who had spoken out on the need to impeach Trump, as the House Republican Conference Chair, the third highest position in the party. The ten brave congresspeople who put country before party and voted to impeach Donald Trump. The list could go on and on.

The bad news is that United State of America is actually the divided states of America, and our democracy is at a pivot point. The good news is that we have been there before and we have taken the path forward rather than the path backward.

Where exactly does our democracy stand now? The latest AP-NORC Center for Public Affairs Research poll, released in early February, disclosed that a large majority of Americans (more than 80%) still value core democratic principles such as a fair judicial system and the rule of law; individual liberties and freedoms as defined by our constitution; and the ability of people living here to get good jobs and achieve the American dream.

The flip side of the poll is that in terms of how well the U.S. democracy is working: only 16% of respondents said extremely/very well; 38% said somewhat well; and 45% said not too/not well at all. 54% felt America’s best days are ahead of us and 45% felt they are behind us. 36% expect the country to be less divided over the next five years, 33% feel it will become more divided, and, 29% felt it will stay the same.

Not surprisingly, there were large differences of opinion on the performance elements of the democracy by party affiliation. The Democratic respondents were more optimistic and positive in their responses, and the Republican respondents were less so than on the AP-NORC poll conducted in October before this year’s elections.

The bottom line is that our democracy remains fragile and fractured and our people polarized. There is much work that needs to be done to create some sense of togetherness and a shared path forward.

As Pulitzer Prize winning historian, author of the best-selling The Soul of America: The Battle for Our Better Angels, and advisor to President Biden on speeches, Jon Meacham reminds us the country and democracy has been through tough and tumultuous times before and survived because it advanced and overcame its deficiencies rather than succumbing to them.

HBO did a documentary, The Soul of America, featuring Meacham, which ran in December after the election. As reported by Henry Mance of the Financial Times in his article on Meacham and the documentary, Meacham explains:

My argument for years has been that there’s a misimpression that if only we could go back to X, things would be better. So, I always say, where do you want to go back? Name that year. And I can probably without much problem say that if you were a woman, a black person, a low wage worker, you probably wouldn’t go back.

The twin impulses that are worth avoiding are nostalgia for an age that didn’t exist and a kind of narcissism of the present, which suggests that problems — as [historian] Arthur Schlesinger suggests — are uniquely oppressive.

Picking up and building upon Meacham’s observations, MTG’s path backward would be terminal for our American democracy. There is only one path that America can take and that is MLK’s path forward.

As the years since MLK’s tragic death in 1968 have shown, the progress on that path will be slow and not always steady. There will be stumbles and setbacks. At points, the path will have to be rebuilt or built anew.

Because of this, there will be the need for patience and persistence in making the journey. But, we Americans must persevere because that path leads to the mountaintop.

We should remember, as Martin Luther King, Jr. told an overflow crowd of more than 15,000 in Memphis, Tennessee on April 3, 1968, the day before he was assassinated by James Earl Ray;

We’ve got some difficult days ahead. But it really doesn’t matter to me now, because I’ve been to the mountaintop…I’ve seen the Promised Land. I may not get there will you. But I want you to know tonight, that we as a people will get to the Promised Land.

Indeed, we as Americans do have some difficult days ahead. But we can get to that mountain top and the Promised Land, if we discover our better angels and choose the right path to walk and work upon together.

That path is the MLK path. Forward!