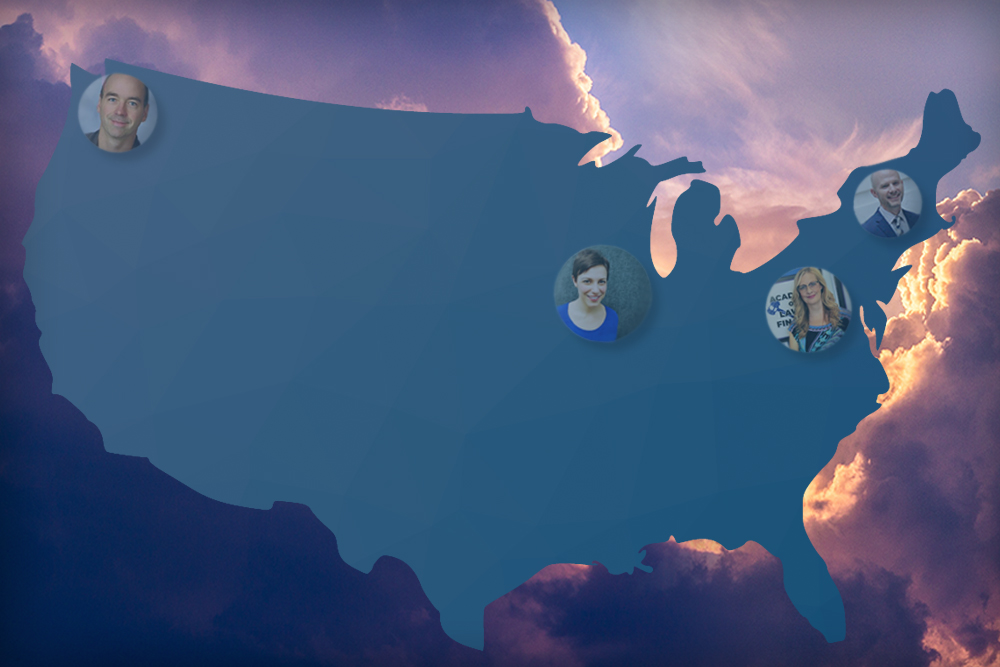 It’s no secret that civic education in middle school has virtually disappeared in this 21st century as STEM has taken precedence. It is a secret though that there are still thousands of middle school teachers across the country who are investing their time, talents and energy to cultivate 21st century citizens in the classroom and beyond.

This should be a secret no more. That is why, on October 18, the Frank Islam Institute for 21st Century Citizenship (FII), in collaboration with National Association of State Boards of Education (NASBE), presented the first Civic Engagement Champion Awards to four outstanding teachers who have excelled in preparing the citizens of tomorrow today. They are: Jane Leyderman, Dever Elementary in Chicago, IL; Michael Neagle, Pyne Arts Magnet School in Lowell, MA; Michelle St. Pierre, Loch Raven Technical Academy in Baltimore County, MD; and Don Jenkins, North Whidbey Middle School in Oak Harbor, WA.

In this three-part series of blogs, we give these teachers a platform to discuss what they and their students have done; to share a little bit about who they are; and to provide their thoughts on what should be done to improve civic education in the United States.

The common characteristic for all of these award-winning teachers is that they have elevated the students voice. They have made it meaningful in bringing about improvements that have benefitted their schools and communities. As these teachers testify, that elevation has taken many forms.

Jane Leyderman’s students at Dever Elementary in Chicago raised their voices to promote period equity. Jane provides the following details on their efforts:

For the past two years, my students have conducted the Issues to Action project through Mikva Challenge. Through the course of the project, students examine issues in their schools and communities, examine the power structures involved, do a root cause analysis, create an action plan to address the issue, and then execute the plan. The last action is a showcase where students from around the city get to present their work to other students and adult allies.

Last year, one of my classes was concerned with the issue of period equity at our school. They noticed that the pad and tampon dispenser in the bathroom was not stocked, and that the girls had to go to the office downstairs to request a pad from the male school clerk. Students felt that this was inequitable. Not only was it embarrassing, but in a bigger sense, the embarrassment played into the larger stigma that existed about menstruation in our school and our society.

To create a more equitable school, students decided to create “period packs,” which included pads and tampons, as well as an inspirational message. Mixed-gender groups of students went to all the 5th-8th grade classrooms, introduced their project and why they were doing it, and delivered the period packs to all the girls. Students also created a planet-themed female-inspired art installation they called the “Solar Sis-tem” to put up in our school to fight the stigma around menstruation.

The amazing thing about this project was how it brought the whole class together. At first, a small group of girls advocated for it. After they did a water demonstration using a pad and a tissue, multiple students were convinced. The more learning around period equity that the class did, more and more students got on board. In the end, it truly was a full-class effort, with boys able to express why this issue was important to everyone. The group presenting the project at the showcase was made up of two boys and a girl.

As a middle school civics teacher, I’ve had the opportunity to witness many young people raise their voices to improve our school and community. I partner with Generation Citizen to provide an action civics curriculum and one of my favorite projects involved students working together to address educational inequity.

While conducting community interviews my students discovered their peers in many of the more affluent towns around our city begin world language education in fifth grade. Our city, which has a poverty rate of twice our state average, does not offer world language classes until high school, in ninth grade. At 13 and 14 years old my students recognized this put them at a significant disadvantage for college and career readiness. They met with our assistant superintendent and learned our city’s middle school world language program had been discontinued nearly 20 years ago due to budget constraints.

Rather than simply accept this, my students conducted research and put together an action plan. They met with school committee members, wrote op-eds, and produced a video with student testimonials. They also engaged with the mayor and advocated for a budget increase to fund world language education in all nine of our middle schools. I’ll never forget watching as Bryan, a typically shy student, sat at our principal’s desk and explained to the mayor in a professional and powerful presentation why all middle school students should have access to world language education.

Although the funding gap was too significant to overcome, they didn’t give up. My students secured a $2,600 grant to offer a year-long language pilot program in our school, and after surveying students and parents they arranged for a Spanish course. Thanks to their determination world language education at the middle school level returned to our city after a nearly 20-year absence.

Michelle St. Pierre’s students at Loch Raven Technical Academy in Baltimore County, raised their voices after the school shootings in Parkland, FL and then carried on to extend their involvement further. Michelle describes their activism below:

Last year, I was reinvigorated in my profession as social studies teacher by the students within my school, who were shocked and angered by the shooting at Parkland. They organized a walkout, speeches and conversations with local politicians, and they also took their message to our nation’s capital, and to the March for Our Lives. With these young activists moving into 8th grade for the 2018–2019 school year, I wanted “resistance” to be a spark and a theme for all my courses.

Students first examined resistance against the institution of slavery by reading two novels, The Underground Abductor by Nathan Hale and the Fires of Jubilee by Stephen R. Oates. They learned that whether the action was successful or not, each act of resistance can still have a transformative impact on society.

Students then extended their knowledge of resistance and activism through lesson ideas modeled on current activism from the Mikva Challenge- Project Soapbox where students examined activists like Ka Hsaw Wa, Van Jones, Wangari Matthai, Marian Wright Edelman, and Elie Wiesel. As students were inspired by these voices, they selected their own issues of activism from personal connections and/or real-world issues. Some of the topics that inspired them for change were college athletes and admission, LGBTQ rights, teenage mental health, and many more.

Students investigated their topics, looked for activists and organizations of actions, spoke with one another about the civic issues and actions and then presented their call to action in a Soapbox Competition. Students shared their call to action speeches and felt empowered. Students also connected with one another about issues that bridged friend groups and cliques.

But the most important result of this project and competition is that of change. Some of the issues presented were based on national and world issues, but the issue of LGBTQ rights and acceptance was something within the schoolhouse that we could change and become better as educators making sure that all students feel accepted. So, at the beginning of this year, our faculty will receive training on LGBTQ rights and non-binary language.

In conclusion, while the songs these student groups have lifted their voices to sing are different, they are similar in that they are sung in unity and harmony. This is heartening in these disruptive and cacophonous times.

It gives one hope that this new generation of citizens will make this great nation the United States of America again instead of the divided states of America. Empowering middle school teachers are empowering their students toward that end.

In our next blog in this series we will examine what brought these civic engagement champions to the empowerment table and how what their students do keeps them there.