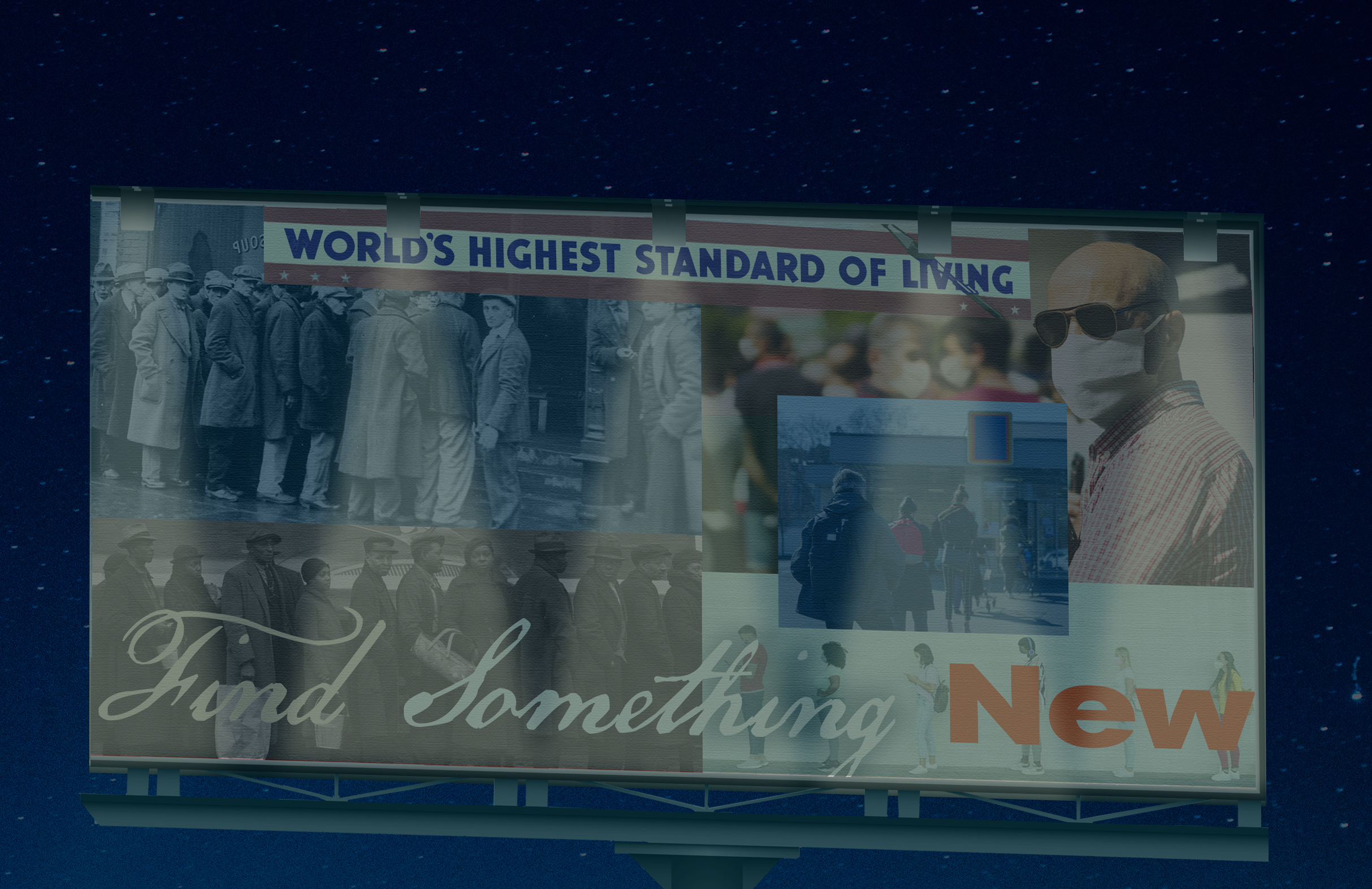 What is needed at this time is a massive and targeted jobs bill. The goal for that bill should be: To put American Workers back to meaningful work in full-time jobs in as short a time frame as possible.

They are not job creators, however, and do not restore the dignity that only a job can provide. Employment benefits do that by promoting a sense of independence and self-sufficiency.

We made that recommendation and observation in a blog posted on May 27. We share those thoughts again because the need for such a bill and employment benefits are even greater than they were just a little over two months ago. And sadly, that need may very well intensify through the end of this year and into 2021.

In May and June, it appeared that the economy was starting to rebound and jobs were coming back a little quicker than expected. That was due to the impact of the financial assistance provided through the CARES Act and the premature reopening in a number of states.

The virus proved the rapid re-opening was a mistake, as was the unwarranted belief that a recovery was imminent. To show where things stand today and what might be in store in the future, consider the following:

Fiction is Donald Trump’s continuously asserting that one day Covid-19 will just magically disappear. Or, Larry Kudlow, Director of the United States National Economic Council, asserting on Sunday, July 26 — in spite of all the evidence to the contrary — that a “V-shaped recovery is still in place” for the American economy.

The only place that recovery is taking place is in Director Kudlow’s head. When the economic impact was first felt, there was some speculation that this might be a V-shaped recession.

That speculation is over. The V-shape has been thrown out the window.

Opinions among economists now vary as to whether this recession/depression will be W-shaped, U-shaped or L-shaped. None of these shapes will be good for the American economy or American workers.

In fact, they will most likely be very bad. Because, as Robert Samuelson of the Washington Post writes, drawing upon work and words of economists Carmen Reinhart and Vincent Reinhart, we are in a “pandemic depression.”

In all fairness to Mr. Kudlow, he has not been the only one in denial regarding the true state of the American economy. Senate Republicans have been in this delusional mode along with him.

That’s the only plausible — although not acceptable — reason for their not even considering an extension of the supplemental unemployment benefits of $600 per week provided through the CARES Act until about ten days before they were to expire on July 31. The $3 trillion HEROES stimulus package that the Democratic House passed on May 27 extended the $600 per week supplemental benefits through January 31, 2021.

The Republican senators were not only slow to act. They were also extremely stingy in the extension of unemployment benefits they proposed in their 1 trillion HEALS Act. The Act called for extending the supplemental benefits at $200 per week for August and September and then requiring each state to transition to a system offering a 70 percent wage replacement benefit and encouraging workers to return to the jobs.

This stimulus package might be called the HEALS Act. That’s a misnomer. What the Republican senators did, with the significant reduction of the benefits that would be provided through the Act, was to put their HEELS directly on the economic jugulars of American workers.

The Senate Republicans apparently decided to proceed in this manner because a group of their colleagues felt that unemployed workers were “gaming” the system. These senators thought laid-off employees were not returning to work because the benefits they were receiving were more than the wages they would be paid on their jobs. That was the senators’ opinion, based on no data.

A study by Yale economists found data did not support that opinion. In fact, it showed the opposite.

The Yale study conducted using data gathered between March 22 and for six weeks until early May concluded;

…We find that workers facing larger expansions in UI benefits have returned to their previous jobs at similar rates as others. We find no evidence that more generous benefits disincentivized work either at the onset of the expansion (CARES Act) or as firms looked to return to work over time.

The Yale study was not an outlier. As Catherine Rampell of the Washington Post reports, there are four other economic studies that present similar conclusions.

The Republican senators’ underestimation of the resilience and tenacity of the American worker, and their failure to act in a timely manner on their behalf, is inexcusable. It has put tens of millions of those without jobs into economic limbo.

Democratic leaders Nancy Pelosi and Chuck Schumer, Treasury Secretary Steve Mnuchin, and White House Chief of Staff Mark Meadows met beginning in late July to try to try to agree on the scope and content of a new stimulus package. After prolonged discussions, there was a deadlock and the meetings came to a grinding halt on August 7. Each side blamed the other for the failure to reach a deal.

Shortly after the collapse of the congressional negotiations was announced, President Trump held a “press conference” at his Trump National Golf Club in Bedminster, N.J. This conference, which appeared to be as much a campaign rally as a news briefing, was attended by reporters and members of the golf club.

In this session, Trump said he was considering using executive orders to do a number of things, one of which was providing some form of enhanced unemployment benefits. No specifics were given, however.

The next day he signed four executive orders — one of which would deliver additional unemployment benefits at a reduced rate of $400/week, versus the $600 furnished through the CARES Act. The states would have to provide 25% of that amount.

Some states may decide not to participate. And because this is a new program, it would require an alternative delivery system for those payments and would be extremely difficult to implement.

There is a question whether the President can legally take this executive action on unemployment aid. There is no question that if it is legal, the dollars available will be insufficient to meet the need. They will not pull those unemployed citizens who have become the unwitting and unwilling pawns in these political negotiations and presidential showmanship out of their economic limbo.

So, the remaining question, at this point, is when and if a new stimulus package will be implemented that will be scaled to the size of the need. The best case is that it will be sometime in the near term. The worst case is that there will be no package.

If there is no new package, the American economy writ large will collapse, as it has been artificially propped up and supported in its initial recovery by earlier stimulus funds. Our fondest hope for this country and its citizens is that there is a package which includes robust unemployment benefits.

Even if there is one, it will only meet part of the need for those who are unemployed. It will not address the underlying need of enabling and empowering them to go back to work.

That will require a targeted and massive jobs bill. As noted in our earlier blog, that bill should be comprehensive and include, but not be limited to, the following essential components:

There are numerous other recommendations that have been advanced that can be used to make the jobs bill as robust as it will need to be to help rebuild the American economy. Here are a few:

All of these are serious and substantive improvement proposals which would create jobs and enhance employment benefits. There is another recent proposal to help the American Worker that received a fair amount of publicity but was neither serious nor substantive.

It is the “Find Something New” initiative rolled out by the White House on July 14, an ad campaign and website designed to promote the benefits of skills training for careers in rising occupations that don’t require college degrees, such as computer support specialist, line installer, and registered nurse.

The initiative was spawned by the President’s National Council for the American Worker Executive Order. That Order issued on July 19, 2018 established the American Workforce Policy Advisory Board (Board) which is co-chaired by Ivanka Trump, Advisor to the President, and Wilbur Ross, Secretary of the Department of Commerce.

The Find Something New announcement and campaign were roundly criticized in social media as “tone deaf” and “clueless,” given what was and is going on in the American economy and for the American worker due to COVID-19. As importantly, these actions were not relevant to the mission of this Board, which is “…to provide a coordinated process for developing a national strategy to ensure that America’s students and workers have access to affordable, relevant and innovative education and job training…”

An ad campaign is not a national strategy. A listing of available programs and options for skills training does not guarantee their accessibility or affordability. Find Something New is smoke and mirrors, when what is needed are bridges and paths forward.

In conclusion, there is much work that needs to be done to deliver adequate employment benefits for the American worker. PPP is a starting line but not anywhere near the finish line.

The current economic conditions and problems have already outstripped the Great Recession of a little more than a decade ago and are beginning to rival the Great Depression of the 1930’s. Noted Harvard Professor Kenneth Rogoff — an expert on economic crises — has declared: “We are going to clock the worst recession since the Great Depression, regardless of how fast we bounce back. The virus is coming back, hard and fast. It really does look like this is going to have profound long-term impacts.”

As we noted in our earlier jobs post, during the time of the Great Depression, President Franklin Delano Roosevelt’s New Deal was centered on the 3 R’s: Relief, Recovery and Reform. The United States, American businesses, and American workers are still in the Relief phase.

This new stimulus package will continue that relief until we can gain control over the virus, which today is still controlling us. After that, a robust jobs bill will move the country and the American workers into the Recovery phase. And from there we can move on to the Reform phase and an American Renewal Plan to reverse the forces of repression and regression that hamstring our democracy today.

The American workers have made this journey before. They are prepared and want to make it again. If given the opportunity and the benefit of employment, they will do the hard work required to ensure that America remains and becomes an even better land of opportunity for all.