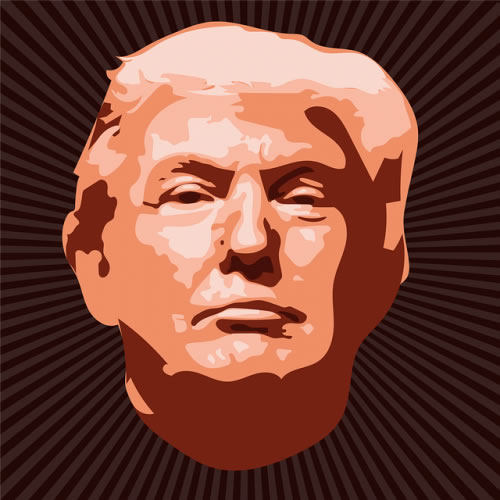 On November 11, this past Veteran’s Day, people and politicians across the nation turned out to show their respect for those who have served our country. Donald Trump was not among them.

He was AWOL then as he has been so many times in the past when it comes to demonstrating a genuine commitment to and respect for those who have served in the military.

Trump’s being missing in action on Veterans Day here in the States added insult to the injury that he delivered by not visiting the Aisne Marne American Cemetery for WWI veterans in France while he was there to commemorate the World War I armistice. His reason for not going to the cemetery was that his helicopter could not take off because of rain and that the more than two-hour drive was inadvisable for him.

Trump also did not walk in the rain down the Champs-Elysees to the Arc de Triomphe together in unity with the other world leaders to participate in the official commemoration ceremony for the armistice. Instead, he was chauffeured to that event in a motorcade to join those leaders.

Trump did stand in the rain to give his comments at the Suresnes American Cemetery after that ceremony. Unfortunately, he managed to diminish the solemnness of that serious moment. He made it more about him than those being acknowledged in his official remarks by observing off-the-cuff to a group of veterans and others in a tent that, “You look so comfortable up there, under shelter as we’re getting drenched.”

That aside revealed the real Donald Trump. The Trump who is self-absorbed.

Trump himself was never a veteran. When he was younger and the Vietnam war was raging, he received five draft deferments — four for being a college student and a fifth for bone spurs on his heels.

These enabled Trump to run away — but probably not so quickly because of those bone spurs — from time in the military and becoming a veteran.

Nonetheless, Trump’s public pronouncements — and expressed policy positions during his campaign to become President and since he has held that office — have been salutary toward veterans. When one peels back the layers of the onion and looks more closely, however, it becomes apparent that he continues to engage in avoidance behavior toward and regarding veterans.

The litany of that avoidance could go on and on and on. Some low-lights in chronological order follow.

Trump got quite a bit of press by not attending a Republican presidential debate hosted by Fox News on January 28, 2016. Instead, he held a fund-raiser for veterans with donations to be made at the Donald J. Trump Foundation for Vets web site. The event raised $6 million.

This might be construed as an exemplary veteran-supporting action until one analyzes the handling of the funds that were raised. In late May, nearly four months after the event, the media reported that none of the $6 million in the Donald J. Trump Foundation including the $1 million Trump had promised to donate himself had been disbursed to veterans’ groups or causes.

Shortly after the press inquiries intensified, on or about May 24, the President announced that he had given his $1 million to the Marine Corps-Law Enforcement Foundation. On May 31, at a press conference, Trump released a list of the veterans’ organizations that had received funds.

Trump gave various explanations for the delay in fund distribution. At one point he stated, “You have a lot of vetting to do.” When the list of fund awardees was disclosed, Trump walked that back saying that the money had been given earlier and that he didn’t release the names sooner in order to respect the privacy of the recipients.

No matter the reason, there was finally accountability for the fundraising promise. On Veterans Day, November 11, 2016, three days after Donald Trump was elected President of the United States, there was very little accountability to veterans from Trump.

The President-elect did manage send out a cursory tweet acknowledging veterans. He tweeted, “Today we express our deepest gratitude to all those who have served in our armed forces.”

But Trump did not attend any ceremonies recognizing or make any visits to veterans. His excuse was that he was spending Veterans Day focusing on the formation of his new administration. In a tweet that morning, he declared “very important” decisions about who would be in that administration would be announced soon.

On Veterans Day in 2017, the first year of his Presidency, Trump did not participate in any official veterans’ events in the United States. In his defense, he was out of the country at that time in Vietnam.

He spoke to a group of U.S. veterans while there. And, as is his wont, he overstated and exaggerated what had been accomplished at the Department of Veterans Affairs (VA) since he had become President claiming that there had been “great strides” and that the VA was already a “whole new place.” An AP fact check two days after that announcement debunked that statement.

In July of 2018, President did show up for a veterans’ event in the U.S. delivering a speech to the Veterans of Foreign War (VFW) in Kansas City Missouri. This provided a chance for Trump to show his true colors and allegiance — and he did.

Trump did address some issues pertaining to the military and veterans…
But it wasn’t long before the event began to resemble one of his campaign rallies.

In true Trump fashion, the President used this VFW speech to make it about Him and his beliefs by railing against the media as “fake news;” defending his trade policy and tariffs; and attacking the Democrats for their positions on immigration.

It seems that the President is not the only one who thinks that when it comes to veterans it is all about Him. So, too apparently does Secretary of the Department of Veterans Affairs Robert Wilkie.

That was Roll Call’s opinion. Here is Wilkie, in his own words, in an excerpt from a guest opinion column for USA Today that was published on November 16:

Make no mistake: President Trump has kept his promises to keep our country safe, revitalize our military and reform the VA. Not since President Lincoln has another president done more to ‘care for him who shall have borne the battle and for his widow, and for his orphan,’ just as our nation deserves.

USA Today did not agree with Wilkie’s assessment, publishing an opinion piece by its editorial board titled “How Trump can make it up to the military and ‘the vets’ for recent fails.”

As Stars and Stripes reports, the White House veterans’ event was apparently convened to counteract the substantial negative criticism that Trump received for his notable and inexplicable absence from Veterans Day itself. The special White House veterans event obviously did not serve its intended purpose of diverting attention from the President’s faux pas and failings regarding veterans.

That is why in an interview with Chris Wallace for his Fox News Sunday show, President Trump did something that he rarely does. He admitted he made a mistake. He made that mistake by not going to Arlington Cemetery on Veterans Day.

Trump said, “In retrospect, I should have and I did last year and I will virtually every year.” He went on to try to rationalize his behavior by telling Wallace, “But we had come in very late at night and I had just left, literally, the American cemetery in Paris and I really probably assumed that was fine and I was extremely busy because of the affairs of state — doing other things.”

This was classic Trump — a non-apology apology and a lie. The lie, as noted earlier is that Trump did not go to Arlington Cemetery in 2017, he was out of the country.

The truth is that Trump did not participate in a Veterans Day celebration in the United States in 2016, 2017 and 2018. That is three strikes and he should be out when it comes to his disingenuous claims regarding the military and veterans.

But he is not. He is still our President, our commander in chief.

He is the commander in chief who has ordered over 5,000 of our active duty soldiers to the border to stop the concocted “invasion” by those in the caravan coming through Mexico.

These men and women will someday be veterans. President Trump who never served in the military due to his bone spurs will never be. He has been AWOL from the beginning for our veterans and that is the way he remains.