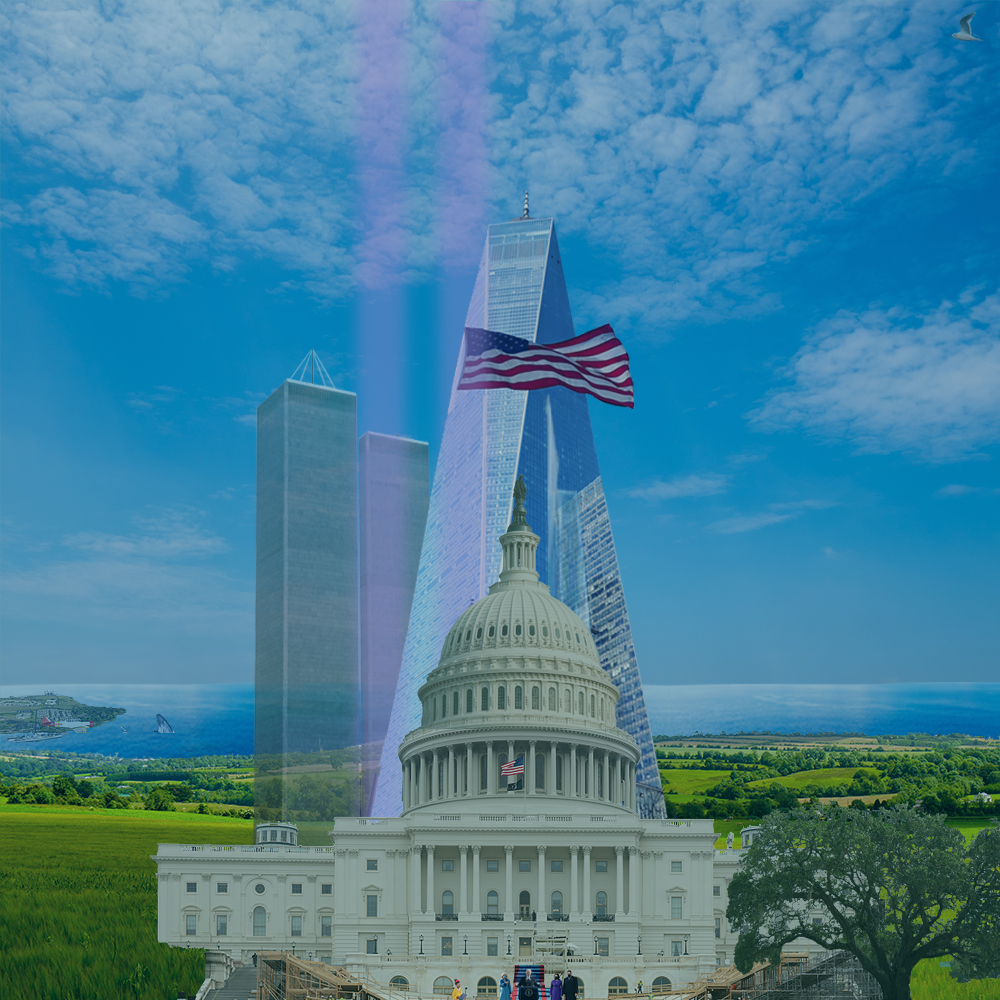 12/7, 9/11, and 1/6. If those were lottery numbers for the U.S.A., they would be losers. That’s because they represent tragic dates in our American memory.

On 12/7/1941, the Japanese bombed Pearl Harbor. On 9/11/2001, Al-Qaeda terrorists crashed planes into the Twin Towers of the World Trade Center in New York City, the Pentagon Building, and the Pennsylvania countryside. On 1/6/2021, a violent mob of domestic terrorists stormed and desecrated the hallowed halls of Congress in the Capitol.

On 12/8, President Franklin Delano Roosevelt began his short speech to a joint session of Congress by stating, ‘Yesterday, December 7th 1941 — a date which will live in infamy — the United States of America was suddenly and deliberately attacked by naval and air forces of the empire of Japan.” Near the end of that speech, Roosevelt declared, “I believe that I interpret the will of Congress and of the people when I assert we will not only defend ourselves in the uttermost, but will make it very certain that this form of treachery shall never again endanger us.”

On 9/12, a bipartisan group of approximately 150 members of the Congress gathered on the east steps of the Capitol to show strength and unity in response to the 9/11 attacks. House Speaker Dennis Hastert (R-IL) spoke, there was a moment of silence, and then the members broke into an impromptu version of God Bless America.

On 9/14, President George W. Bush visited Ground Zero at the World Trade Center. He used a bullhorn to address the rescue workers toiling there. He began saying a prayer for America because of what had happened. A rescue worker shouted out, “I can’t hear you.” President Bush responded, “I can hear you! I can hear you. The rest of the world hears you! And the people — and the people who knocked these buildings down will hear all of us soon.”

On 1/6, President Donald J. Trump spoke at a Save America rally on the Ellipse in the park south of the White House. Trump had invited his loyal followers to this rally, tweeting, “Be there, will be wild!” After the thousands in attendance were goaded toward violence by Congressman Mo Brooks (R-AL), Rudy Giuliani, Donald Trump Jr., and others, President Trump sealed the deal by inciting a riot.

During the course of his remarks, President Trump, among other things, told his soon-to-be storm troopers:

— “We’re going to walk down to the Capitol…you’ll never take back our country with weakness. You have to show strength and you have to be strong.”

— “And after this, we’re going to walk down, and I’ll be there with you…We are going to the Capitol… we are going to try and give them (Republicans in Congress) the kind of pride and boldness that they need to take back our country.”

Thus, inflamed and emboldened, Trump’s army of alleged patriots marched down Pennsylvania avenue, stormed the Capitol building and engaged in an act of insurrection.

On January 13, the House of Representatives impeached Trump for “Incitement of Insurrection.” The Article of Impeachment stated, “In all this, President Trump, gravely endangered the security of the United States and its institutions of Government. He threatened the integrity of the democracy, interfered with the peaceful transition of power, and imperiled a coequal branch of government.”

Trump’s enlistment and encouragement of the enemy within which culminated in the endangerment and imperilment of January 6 did not begin on January 6. In has been going on for the entirety of Trump’s term in office.

The U.S. democracy is currently suffering from a serious case of white nationalism, populism, and identity politics compounded by Trumpism. This malady has infected and infested the United States because President Donald Trump captured the hatred, prejudice, and discontent that was present in this country and injected into it his arrogance, petulance, and ignorance of things governmental, and then spread it across the country.

We concluded that blog as follows:

We are in a struggle for the head, heart and soul of America. It is a struggle that must be won.

If Trump wins, America loses. And our American democracy will die not in darkness but in the bright white light, explosions, and fireworks of Trump’s making.

The afternoon of January 6 brought the bright white light, explosions, and fireworks to the Capitol, and put all innocent people there at great risk. Fortunately, because of the courage of the leadership and members of Congress, who reconvened in their joint session on the evening of January 6, and confirmed and certified the Electoral College vote count in the early morning of January 7, our democracy did not die — but it was seriously damaged.

The struggle for the head, heart and soul goes on. It will have to go on for many years. due to the fact that the resentment and antipathy of those in the Trump camp — some call it a cult — is deep-seated and ingrained.

Thomas B. Edsall highlights the extent and nature of this condition in a New York Times article titled “White Riot”. In his piece, Edsall asks the question, “How toxic is the combination of pessimism and anger that stems from a deterioration in standing and authority?”

The answer, based upon the input of a “wide range of experts” he surveyed, is extremely so:

The other experts Edsall cited reinforced and amplified the picture painted by these experts. The bottom line is that the “Retrumplicans” have hardened values, attitudes and beliefs (VABs). Just removing Trump from the picture will not make them or their VABs disappear.

It will also not erase 1/6/2021 from our American memory. Near the end of her New Yorker article titled, “What Should We Call the Sixth of January?”, Harvard professor of history Jill LePore reminds us, “ ‘Remember this day forever!’ Trump tweeted at one minute past six on Wednesday night.”

Professor LePore proceeds to note, “There’s no danger that anyone will forget it, by whatever name. The harder question is not what to call the events of that day, but what to make of the maddening four years and more that led up to it: the long slow rot of the Republican Party; the perfidy of the Republicans in the House and the Senate since January 2017;…”

139 of Republicans in the House and eight in the Senate voted not to overturn the presidential election results. Only 10 Republicans joined with their Democratic colleagues in the vote to impeach Trump.

Those Republicans who continued to stand with Trump, and to put his miscreant behavior, baseless claims, and their party before country, are part of the problem. As Professor Bernard Grofman, a political science professor the University of California, Irvine wrote to Tom Edsall, “It is the enablers of the mob who truly deserve the blame and shame.”

Professor Grofman makes it clear, however, that there is more than enough blame to go around, and that it is bipartisan in terms of generating the decades-long decline that moved many toward the mob. He opines, “We would not have Trump as President if the Democrats had remained the party of the working class. And, he suggests, “… white, less well-educated voters didn’t desert the Democratic Party, the Democratic Party deserted them.”

1/6 should be a wake-up call for America. And should be heard as a call to action for all patriotic Americans who recognize that we are a nation divided, and that we need to become a nation united in order for this great experiment in democracy called the U.S.A. to advance.

There is a tremendous amount of work that will have to be done by the committed citizens of all stripes and persuasions who are willing to join forces to bring us together. And it will take a very long time. We, the people, need to understand this. The United States participation in World War II precipitated by 12/7/1941 lasted until 9/2/1945. The war on terror precipitated by 9/11/2001 goes on, in some ways, until today.

1/6 is a tragic date and should be remembered as such. It should also be remembered as the date of a wake-up call and a call to action to reverse the downward trajectory of the American democracy.

In closing, there is one other date that should be remembered. That date is 1/20/2021 — the date that Joe Biden took office as the 46th President of the United States of America.

It is the date that this country adhered to its defining democratic values, proved its resilience and tenacity, and started to build back better. The long hard journey to rebuild and renew America has begun.

And now, a rise in political extremism, white supremacy, domestic terrorism that we must confront and we will defeat.

To overcome these challenges to restore the soul and to secure the future of America — requires more than words.

It requires that most elusive of things in a democracy:

We will rise from the gold-limbed hills of the west,

We will rise from the windswept northeast

Where our forefathers first realized revolution

We will rise from the lake-rimmed cities of the midwestern states,

We will rise from the sunbaked south

We will rebuild, reconcile and recover

And every known nook of our nation and

every corner called our country

our people diverse and beautiful will emerge

When day comes we step out of the shade,

The new dawn blooms as we free it

For there is always light,

If only we’re brave enough to see it

If only we’re brave enough to be it.